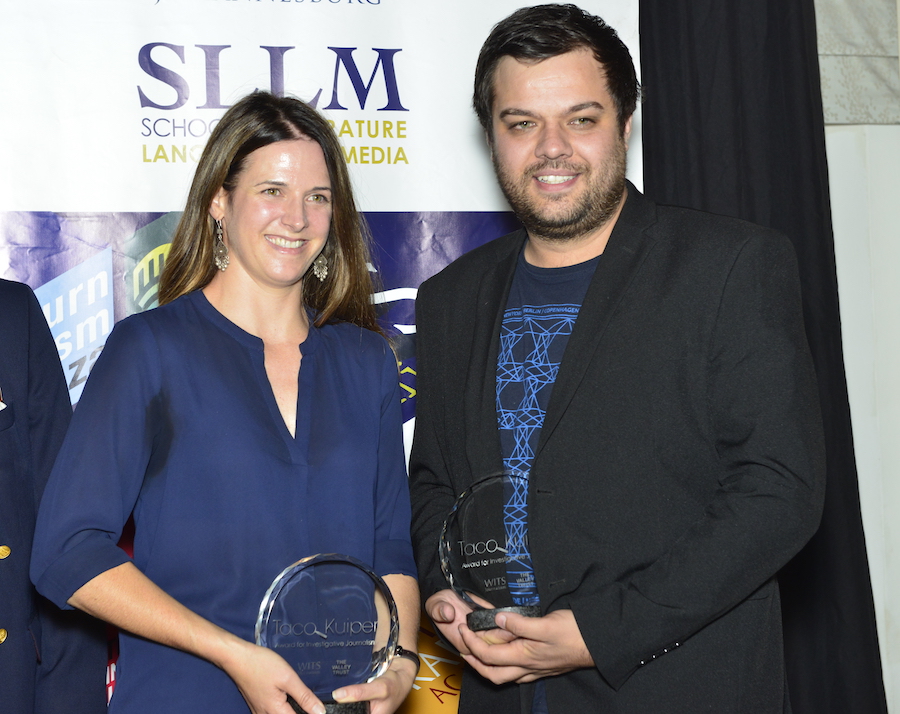 Stories by journalists from News24 and amaBhungane were honoured with the top prize at the 14th annual Taco Kuiper Award for Investigative Journalism on Friday 29 March at the Wits Club in Braamfontein, Johannesburg.

The shared award went to amaBhungane’s Susan Comarie for her Regiment Capital series, and News24’s Kyle Cowan’s work on Bosasagate. The two winners received prizes of R120 000 each.

Caxton Professor of Journalism at the University of the Witwatersrand and convenor of judges said knocking down the finalists to the top three was the hardest part of the judging process.

“As always, we had to ask ourselves what we most value: Is it stories that have the most impact, or different ones that open up different parts of our society? Is it the racy story, or the one that shows dogged digging? Is it important to break the story first, or do it best?” he said.

Comrie said that being recognised for work done on her own was a big deal as she had previously won with 18 other journalists from her team.

“To win in your own name is amazing. The Taco [Kuiper Awards] are the most prestigious awards,” Comrie said. “We had a tough call to make. We realised that we had unique information and no one else had it. Some of the information was used at the State Capture Inquiry. It’s one thing to know of corruption, it’s another to see something happen – to see the consequences.”

Co-winner, Cowan’s investigation into Bosasa has also resulted in the company’s current and former executives being interrogated at the State Capture Inquiry.

“Three years ago, I came to the Taco Kuiper awards…I thought to myself, ‘I’ll never be as good as these people in this room,’” Cowan said. “So I can never say no to recognition.”

Comrie plans to put the R120 000 prize into her savings account to buy a boat to sail around the world for two years with her boyfriend. Cowan on the other hand, is set on paying all his debts so that he can be a ‘free man’.

The runner-up prize was awarded to Pauli van Wyk from the Daily Maverick for her entry which consisted of seven pieces she did over a year detailing the devastating effect of Tom Moyane’s reign at the South African Revenue Services. She received a prize of R60 000. 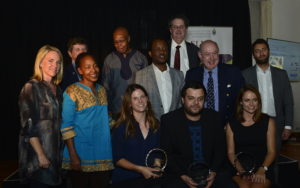 The judges were disappointed at the number of entries for this year. There were a total of 18 entries, a lot fewer than in recent times.

“We attribute this to the general state of the industry, the particular troubles of some of our most regular entrants, and the inevitable focus on the big national story. We are sadly seeing fewer of the unexpected, different, left-field entrants that we so enjoy highlighting and encouraging,” Harber said.

Zanele Mji from amaBhungane was given a special mention for “work that stood out for its quality” by the judges for her two pieces on land: Those graves were title deeds and Cradle of Conflict.

Pulitzer Prize-winning journalist and software engineer, Matthew Caruana Galizia, delivered the keynote address before the awards were handed out. Galizia is the son of the late Daphne Caruana Galizia, an investigative journalist killed by a car bomb near her home in Malta in October 2017.

“When you’re fighting alone against mind-bending corruption, that’s when you’re at your weakest – and power doesn’t respect weakness,” he said.

Despite the many challenges that Caruana Galiza’s mother faced, he made it evident that the governmen’ts efforts to bury corruption were fought back with as much effort and might, inspiring the room filled with journalists to endure the hardships of investigative journalism.

“When justice seems impossible or when fighting feels futile, giving up will only increase the danger for everyone,” he said. “The people that killed my mother, and exposed the country’s democracy and its institutions as a sham have no mercy. They won’t respect people who don’t defy their power at every turn. My mother and people like her –and I’m sure there are many of you like her-don’t live to fight, they fight to live.” 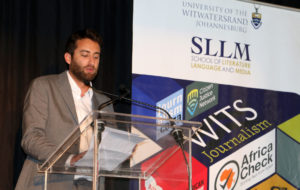 The Pulitzer Prize winning journalist told guests that just by being an investigative journalist at a time when women were expected to be their husband’s servants, his mother shattered a thousand ceilings, and that she inspired generations of women and men.

The software engineer added that his mother would have drawn a lot of strength from the nominated journalists in the room who have gathered under the theme of exposing corruption, and left them with this message;

This was the fourteenth installation of the annual awards in honour of the late journalist Taco Kuiper.