The second Aggrey Klaaste Annual Colloquium aim is to commemorate the events that took place on 19 October 1977, the infamous Black Wednesday. 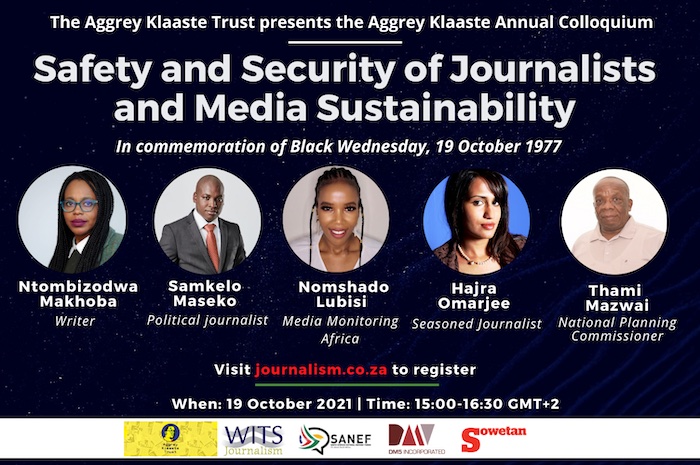 On 19 October 2020, Media Freedom Day, the Aggrey Klaaste Trust (AKT), in partnership with Sowetan, the Journalism Department at University of the Witwatersrand, the South African National Editors’ Forum (SANEF) and DM5 Attorneys, will host a virtual Aggrey Klaaste Annual Colloquium.

The aim is to commemorate the events that took place on 19 October 1977, the infamous Black Wednesday.

On this fateful day, the apartheid government clamped down on a number of organisations and newspapers sympathetic to the Black Consciousness (BC) philosophy. Many activists were arrested and thrown into prison. Also arrested were scores of journalists and editors – Aggrey Klaaste among them. Klaaste spent more than six months at Modderbee Prison, east of Johannesburg. On that day, more than 19 organisations and three newspapers, The World, Weekend World and Pro Veritate, were banned. The clampdown was aimed at stifling media freedom and silencing those who spoke out against apartheid.

The Aggrey Klaaste Annual Colloquium aims to celebrate the courageous spirit of all those journalists and activists who spoke against apartheid and helped nurture a people’s desire for freedom.

The theme of the inaugural Aggrey Klaaste Annual Colloquium is: Safety and Security of Journalists and Media Sustainability