The collaborative effort from amaBhungane,News24 and Daily Maverick scooped the 2017 Taco Kuiper prize for investigative journalism.

The 13th Taco Kuiper Award for Investigative Journalism went to AmaBhungane, Daily Maverick and News24 for their reporting on the Gupta Leaks.

Announcing the Award at the Wits Club, Johannesburg, Anton Harber, Caxton Professor of Journalism and Media Studies at the University of the Witwatersrand and convenor of judges said this was an unusual collaboration between three very different outlets which brought together amaBhungane’s investigative skills and experience, Daily Maverick’s editing and online presentation skills and News24’s reach and impact.

“A formidable combination indeed,” Harber said. This story, together with other work by this team and others, has had remarkable, long-term and still unfolding impact on the politics of the country.” 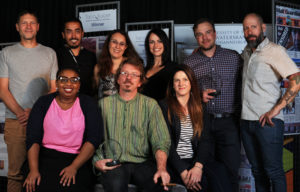 Reporters from amaBhungane, the Daily Maverick and News24 who are the winners of the 2017 Taco Kuiper Awards Photo credit: Gypseenia Lion

The three organisations pieced together disparate pieces of information buried in a massive trove of emails to prove the case of state capture and find new links and evidence of how systemic this corruption was.

Jacques Pauw and Hennie van Vuuren shared the runner-up prize for their published books on the President’s Keepers and Apartheid Guns and Money, respectively.

The judges said that these books were remarkable pieces of work. “They were backed by philanthropic funders rather than commercial newsrooms, which says a great deal about the changes taking place in our industry.”

There were a total of 26 entries for the Awards for work produced in 2017, fewer than in recent times.

“The judges attributed this to the dominance of the big national story, which might have discouraged others from competing, and to journalists combining their talents rather than competing with other publications on the same story,” said Harber.

“But what we lacked in quantity was easily made up in quality, as any of the top half-dozen entries might have been a contender in another year.”

The judges made special mentions for work that stood out and deserved recognition.

Guest speaker at the Awards was Rana Ayyub, from Mumbai, India. She is a journalist who went undercover for eight months to produce Gujarat Files: Anatomy of a Cover-Up and reveal the complicity of prominent politicians in the 2002 Gujarat killings. Shared her experience as an investigative journalist in India and how she self-published her book which sold about 30,000 copies in 13 different languages.

Addressing guests at the lunch, Ayyub said, “This profession has liberated me. I hope it liberates all of you and if it doesn’t then you are in the wrong profession.”

Ayyub was awarded the Citation of Excellence in the 2017 Global Shining Light Award for the brave and fearless reportage in her book at the Global Investigative Journalism Conference that was held in Johannesburg in November last year.