The idea that societies mediate issues through certain kinds of talk is at the heart of democracy. But this imagined foundation of how we live collectively appears to have suffered a dramatic collapse across the world, with many countries apparently unable to solve problems through talk – or even to agree on who speaks, in what ways and where. 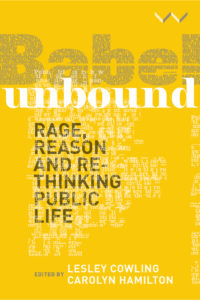 Babel Unbound: Rage, Reason and Rethinking Public Life, edited by Lesley Cowling of Wits Journalism, and Carolyn Hamilton of UCT’s Archive and Public Culture Research Initiative, sets out to explore such questions of democratic engagement. Just released by Wits University Press as an e-book, the collection critically examines public discussion today, but looks beyond the current moment of perceived crisis to demonstrate how public engagements have historically operated. These were not so much as debating forums, but engagements that emerge and circulate through networks.

This circulation is now much more visible as ideas burst beyond the previously constrained “old” spaces for discussion into new networks, sometimes gathering force in public, sometimes disappearing, or hibernating in the byways of discussion.

The 10 contributors to the book combine theoretical analysis with examinations of historical cases and contemporary developments to examine how public engagement works – locally and globally – to mediate, propel or throttle issues vital to societies.

The authors examine charged examples from Africa and South Africa, such as the centuries old Timbuktu archive, Nelson Mandela’s powerful absent presence in 1960s public life, and the contemporary debates around the 2015/2016 student activism of #rhodesmustfall and #feesmustfall. A number of contributors focus specifically on the media and the production of debate, from established “mainstream” media to the “hashtag publics” of social networks.

The essays demonstrate that forms of publicness are multiple, mobile and varied, and propose that new concepts and methodologies are needed to analyse how public discussion works in society.

“This finger-on-the-pulse collection offers a new theory of the public sphere,” and “illuminates the underlying dynamics of public engagement,” says Wits and NYU Professor Isabel Hofmeyr, while Professor of Social Sciences Craig Calhoun calls it ”an exciting book that brings the South African experience into the centre of debate over today’s deep crisis of public life and democracy.”

The book is available free until July 1, 2020 via JStor and ProQuest via any university library, for those who are members. The hard copy will be available soon, and can be ordered from the Wits University Press website, at http://witspress.co.za/catalogue/babel-unbound/ For more information, see