Journalists should report without fear or favour, said the award winning Cameroonian journalist 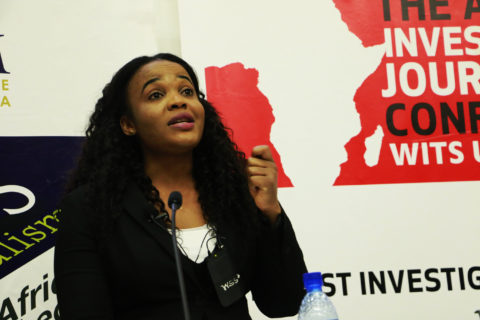 By Naledi Thabane and Tammy Fray

Journalism is a calling that must be answered and fulfilled, said revered Cameroonian journalist Mimi Mefo at the annual Carlos Cardoso Memorial Lecture, held on Monday evening, October 28 at Wits University.

“If given the chance, I’d still be a journalist,” she says.

The lecture commemorates Mozambican journalist, Cardoso, who was assassinated in November 2000.

Mefo, the current editor of Deutsche Welle in Germany, was this year’s keynote speaker at the lecture, which was part of the 2019 African Investigative Journalism Conference.

In 2018 Mefo was arrested on charges of terrorism after publishing a story about an American missionary reportedly shot and killed by the Cameroonian military.

Amid the victimisation Mefo said she faces, she believes that reporters should still accurately report despite the repercussions. She commends the strong network of journalists who supported and stood up for her within and outside Cameroon.

She hopes for a society where “journalists or their families are not attacked or killed for just doing their jobs,” Mefo said, calling for more collaboration to support press freedom.

“I’m sure that every journalist in this auditorium today has experienced what it must feel like to have been in Cardoso’s shoes, of course with the exception of the assassination part, since we are all alive ,” Mefo said.

Simon Mkina, the Tanzania Journalism Alliance president, said Cardoso was an inspiration to upcoming journalists because he was committed to doing ‘real journalism’ despite what the leaders of the country said.