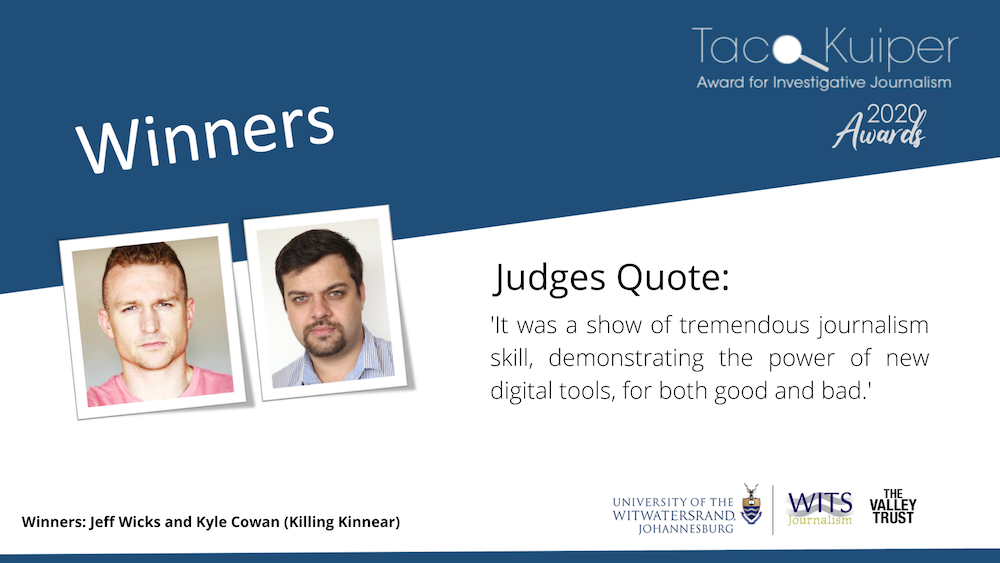 News24 journalists Jeff Wicks and Kyle Cowan have won the 2020 Taco Kuiper Award for Investigative Journalism, the country’s largest journalism prize. They won it for Killing Kinnear, their ground-breaking investigation into who killed the section commander of Cape Town’s gang unit, Charl Kinnear.

‘These reporters used cutting edge digital forensic tools to track down a key figure in the assassination of Charl Kinnear. They tracked and mapped how a private investigator used illegal Location Based Services to follow Kinnear until shortly before his death, as well as a number of other people.

‘The report revealed how police had failed to protect Kinnear and the cellphone service providers had allowed this to happen. It was a show of tremendous journalism skill, demonstrating the power of new digital tools, for both good and bad. It led to the arrest of the private investigator and forced the cellphone companies to take action to stop this activity.’

Runner-up in the award was Carte Blanche’s Tarryn Crossman for her story Midwife Investigations, which exposed a senior and well-known midwife who was using harmful drugs to induce labour without patients’ consent, leading to problematic births and even deaths.

‘It was powerful and important exposé, skillfully told,’ the Judges said.

The judges said that it was important to see that investigative journalism was still showing how important and valuable it was, despite the toughest of conditions. Journalists were continuing their essential work despite having to work under the hostile conditions of the pandemic and the severe financial difficulties of the news media industry. While there was excellent work to be recognized, the judges did note, though, that it appeared the decimation of newsrooms had taken its toll on the quality of editing.

The Taco Kuiper Award has for 15 years recognized the best exemplar of investigative journalism in South Africa that year. It is run by Wits Journalism in partnership with the Valley Trust, to commemorate the late publisher Taco Kuiper.