Lifting the lid on extrajudicial killings of thousands by the police. 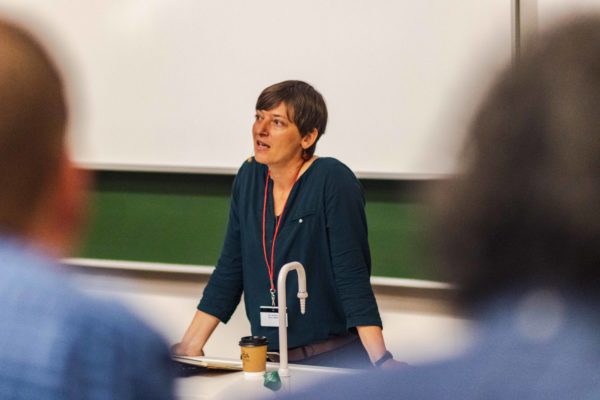 Clare Baldwin, a special correspondent for Reuters, answers questions about the drug war in the Philippines. Photo: Lerato Mokhethi

“WHEN I say what I do, I say I’m an expert investigator of obituaries.”

The investigation followed the election in 2016 of Rodrigo Duterte as president of the Philippines after 22 years as mayor of Davao City. During his election campaign and throughout his presidency, Duterte has promoted the idea that all drug addicts should be killed.

Within a year of Duterte’s presidency, the police had killed over 3 900 people, in “anti-narcotic operations”, according to Baldwin.

In chilling security camera footage obtained by Reuters, the killer cops’ faces are clearly – and easily – identified.  After killing three men, the police dropped off the bodies at a nearby hospital, rendering the crime scene useless.

This, said Baldwin, was a common occurrence in Duterte’s war on drug users – police who openly kill in the middle of the day, shooting citizens in the heart and smoking a cigarette while the bodies get cold.

After spending countless hours scouring public police records, Baldwin noticed a pattern – many of the most brutal killings were conducted by members of Police Unit 6. Upon investigation, it became clear that the unit was run by a group of policemen Duterte had hand-picked from his hometown, known as the Davao Boys.

“One Davao Boy told me he was hired because he has ‘special kill skills’,” said Baldwin. She later discovered that that specific police officer had personally killed over 56 people.

Baldwin said Deterte’s Drug War “is tremendously popular”, and a lot of that popularity arose from the idea that drug users are “bad people”. However, her own investigation found that many of the people killed were poor, struggling to make ends meet, and had not been incapacitated by their drug use.

“We noticed that a lot of the people who use drugs are working two, even three jobs. They use shabu [methamphetamine] to stay awake so they can work more. The drug problem really isn’t that bad,” said Baldwin.

The series of reports on ‘Duterte’s War’ by Baldwin, Andrew R.C. Marshall and Manuel Mogato won the 2018 Pulitzer Prize for International Reporting.

Baldwin told #AIJC18 that extrajudicial killings still happened every week in the Philippines, and that President Duterte had not contradicted any facts published by Reuters.