RDA2020: Radio and the power of exchanging ideas in times of crisis

The second session of Radio Days Africa 2020 kicked off today with moderator Neil Johnson welcoming Ken Benson, the founder of P1 Media Group in US, as well as Kevin Bellwood, the Head of Broadcast at NRG Media Limited in Kenya to a discussion titled “I Know Corona”. After yesterday’s discussion featuring panelists from Tanzania, South Africa and the UK, it would be interesting to find out if the radio industry in other regions had experienced similar challenges amid the changing landscape in the wake of COVID-19. 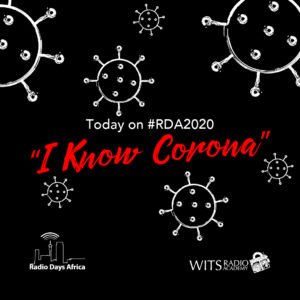 When the virus reached pandemic status, it was Ken who started wondering about how it would be possible to mobilise the global radio community in this uncharted territory. “We felt a responsibility to help our industry navigate this crisis that was approaching like a tidal wave,” he mentioned in his introduction. “Radio has been good for sharing and exchanging ideas for decades, since the beginning really”. The result of this kind of thinking would eventually lead to the creation of Coronavirus Radio Ideas, a Facebook group designed for the sharing and exchanging of ideas between radio enthusiasts and experts facing similar challenges in their markets. In just a short space of time, the group has grown to an established community, now featuring over 2500 members from more than 80 countries across the world.

The community has shared an incredible amount of ideas between its members since it was created back in March. A common theme illustrates just how much people are craving distractions during the pandemic. It has been up to radio stations to respond to this, and as the examples showed, many stations from all over the world have answered the call diligently. From corona song parodies (one of which will change the way you hear “Havana” by Camila Cabello forever) to hosting virtual weddings, mini-concerts and innovative competitions, many stations have been paying particular attention to how they can be a soothing force in the wake of rampant listener anxiety. News outlets have been overly negative in their reporting, adding to this anxiety. Today’s discussion touched on how radio continues to have a role to play in giving people an opportunity to laugh, or the chance to crack a quick smile.

From the ideas shared, it was evident that radio stations have also realised their social responsibility over and above government mandated generic messaging. “Radio shines in times of crisis through community service” according to Ken. This is illustrated by stations like K97 in the US running a billboard campaign separating the K from the 97 in their name to indicate the importance of social distancing. Other billboards have featured famous song lyrics that apply within the context of the pandemic to encourage people to #StayAtHome. A couple of stations opted for a more serious tone, alluding to more serious issues like death rates and the importance of wearing masks, all the while being somewhat less concerned with being a comedic distraction to their listeners.

Kevin has seen this approach first hand in Nairobi in the form of answering the call for more serious needs like hunger. His network of stations aimed to help combat the issue by supplying struggling families in impoverished areas with a staple of ingredients for traditional Kenyan dishes. Referencing Kenyan culture more broadly, he also mentions the knock-on effect that unemployment in the music industry has had on society, which has been two-fold. With most artists being unable to book any gigs since the pandemic started, not only have they been unable to earn an income, but fans are in turn being deprived of one of the greatest soothing tools in history: concerts. “In response, we developed One Africa, a festival consisting of three virtual shows, featuring a collective group of artists from East Africa,” Kevin said. “It was live streamed across all channels, and 10 million people tuned in to watch”. People crave distractions like this, and stations should continue to think out of the box about what they can do to remain a trusted and reliable friend to their listeners, no matter what.

A quick poll run among delegates in attendance today may be an indication as to how much the industry has been affected by the pandemic on a more personal level. It asked delegates if they know anybody who has caught the coronavirus, of which over half of the sample responded with yes. It may be some time until the world fully comprehends this state of “new normal” and the effects of the virus are continuing to reach unforeseen places. In the meantime, radio stations will need to continue to juggle delivering updates, music, offering inventive content, finding new ways to retain commercial viability, and so much more. An important take out from today is that they don’t have to do it alone. Groups like ‘Coronavirus Radio Ideas’ are there to help alleviate the burden irrespective of where the station is geographically located. Better yet, membership to a group like this may even allow for networking opportunities and the exchange of ideas that would not have been possible under previous circumstances. This may even turn out to be a silver lining that helps to better connect and unite the global radio industry moving deeper into the 2020’s.

That’s a wrap for Day 2. For now, the discussion continues on social media at #RDA2020. Day 3 of the conference promises to be a fascinating one, as a new group of panelists will dive into how community radio stations across the African continent have come together to inform and support each other. We look forward to seeing you there tomorrow.