Day 4 of Radio Days Africa 2020 featured a highly anticipated session for many aspiring radio presenters around the continent. In ‘Ask The Programme Manager’, Siyanda Fikelepi (5FM in South Africa), Hennie Myburgh (Jacaranda FM in South Africa) and Chris Choane (Bokamoso FM in Lesotho) shared insights about their respective jobs and experiences, while answering a flurry of questions in a discussion hosted by industry vereran Neil Johnson. 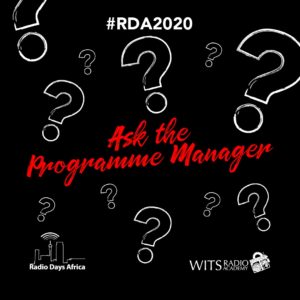 After mentioning how the pandemic has affected their individual stations respectively, with each echoing the challenges of previous speakers this week, the panel dived straight in hot topics related to the programming landscape. Naturally, one delegate was curious about the criteria required to be a good content producer. “The industry has evolved,” Siyanda began. “You are no longer only a content producer. You have to evolve into a content creator, which includes knowing how to edit, rehash and package content outside of the show”. These sentiments were echoed by Neil, who noted that in his experience, hyper specialisation was quickly falling away in the industry.

Becoming a content creator is synonymous with on air presenting as well, especially as more radio personalities double up as online influencers too. Chris was quick to offer a rebuttal when someone asked about whether people get employed on the basis of this. “I’m yet to be convinced that social media numbers translate into audience,” he said. “Stations look for talent first, and big followers are a plus”. Delegate Mpho Moloi subsequently agreed with Chris in the comments section, albeit “only in theory”. It’s clear that this topic should be an ongoing conversation in lieu of how the radio industry continues to adapt in line with simultaneous changes and opportunities in the digital landscape.

One thing that hasn’t changed is that programme managers are sent multiple presenter demos regularly, with the panel estimating that they each receive anywhere from 10 to 20 a week. So what should aspiring radio presenters keep in mind when producing a demo? For Siyanda, it’s first and foremost about understanding the brand that you are sending the demo to. Chris always asks if the person will be able to fit into the station sound or not and vice-versa. “You need to be able to solve a problem for a programme manager” according to Hennie. The panel agreed that starting from the bottom at a campus or community radio station is a great way to gain experience as someone who will eventually have to wear many hats within such a dynamic industry.

If you’re thinking of pursuing a career as a radio broadcaster and you’re keen to learn, the panel suggested the following skills which may come in handy to land you a gig. “Being able to entertain the audience with the skill of storytelling is crucial” according to Hennie. Siyanda voiced that learning how to create content is just as important. “It also helps to understand basic behind-the-scenes elements, like how an ad log works for a three hour show,” he said. For Chris, no skill is more important than the person realising that they have to produce content that can be sold. “A presenter needs to be able to execute responsibilities in a commercial sense,” he added. “Few people truly understand the money element of commercial radio”.

That said, the business element of the commercial radio industry continues to be an important factor to keep in mind when having ambitions of getting on a team that broadcasts nationally. Neil asked the panel an intriguing question in this regard, wondering about the often divisive nature of the relationship between programming and sales departments as a result of competing interests at times. “The divide is still there unfortunately,” according to Siyanda. “Constant communication between the programming and sales offices helps”. For Hennie, it’s about an understanding that the relationship is mutually beneficial to both departments. Chris referenced working with a female sales manager that understood both sales and programming in his time at Radio 2000. “If I had the money, I would bring her over to Lesotho”, he told the panel.

As the session drew to a close, this statement helped to segway the discussion towards the shortfall of women employed in high-ranking programming positions (as evidenced by the all-male panel today). For Siyanda, this problem starts at a higher level. He believes that management has to create the right spaces to incubate talent. Issuing somewhat of a warning, he stated that “if the industry doesn’t incubate the talent, we’ll be asking the same question in 5 years”. Hennie argued that he has seen encouraging female leadership appointments in the industry in recent years. “From a programming perspective there is definitely something to work towards there,” he adds. “The more diverse voices you have in the room, the better chance you have to connect with a diverse audience”. Amid a change in the global landscape in the onset of COVID-19, perhaps the industry now has a new opportunity to break down archaic systems, in turn rebuilding them with strategies promoting greater inclusivity, especially within programming roles.

The end of today’s session came far too quickly, with delegates hungry to have more of their questions answered. Thankfully there will be another opportunity for programming questions to be answered in the final week of the conference, on Monday the 27th of July. Get your registrations in early, as it promises to be a good one. Until then, the conversation continues at #RDA2020 on social media. We’ll catch you tomorrow for more engaging conversations about the radio landscape from across the continent.