RDA2020: The importance and economic potential of community radio

Day 3 of Radio Days Africa 2020 has just wrapped, and in today’s session, hosted by broadcaster Refiloe Mpakanyane, the current community radio landscape was dissected by panelists Franz Krüger (Director at Wits Radio Academy in South Africa), Jean-Luc Mootoosamy (Director at Media Expertise in Mauritius) and Thabang Pusoyabone (General Secretary at the National Community Radio Forum in South Africa). The discussion, titled ‘Local Voices’, kicked off with an important question to the panel of experts: what is the function of community radio? 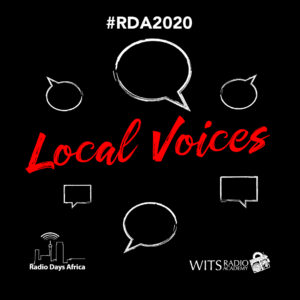 “Community radio must be participatory,” Thabang began. “It has to be firmly rooted in the members of the community”. For Jean-Luc, this type of radio must always be the “voice of the community”. Franz highlighted that community radio provides a space for innovation. He discussed a Zambian station that had been taken off the air for technical issues with their transmitter. Not ready to throw in the towel as a result, they decided to keep their listeners mobilised through a WhatsApp group. Astonishingly, this group ended up turning into a platform for local council to respond to community issues directly. “Their core business wasn’t available, so they came up with an innovative solution,” he said. Community radio clearly has the power to connect communities in a multitude of ways.

Next, the conversation turned to the South African landscape, with Franz sharing the results of a survey about what community radio looks like in the country. The full report is available to be viewed on localvoices.co.za. An interesting observation emerged around community stations clustering around the economic hubs of the country (Gauteng, Western Cape and Kwa-Zulu Natal). Surprisingly, some community stations boast a larger-than-you-would-think listenership. At the time of the survey, Jozi FM in Gauteng was reaching over 500 000 people each week. 14 other community stations had over 100 000 listeners a week, across a multitude of languages. This says something about the potential of community radio and according to the panel, it talks to the huge demand there is for this type of radio in South Africa.

With this demand in mind, the conversation segwayed into the economic opportunity this might present. While community stations are prohibited from being for-profit enterprises, roughly R150 million goes in and out of the sector each year according to Franz. “We underestimate the local economic importance of these stations,” he said. “These stations are a kind of SME”. This notion is reiterated by the fact that the community radio sector creates jobs on a local level (even just by contracting the community electrician to help fix an issue at the station or by employing a cleaner a few times a week). This, as well as any other jobs that are created, in turn helps to boost the local economy and presents members of the community with opportunities that would not have been there otherwise. Community radio makes an impact on air, as well as off.

With this kind of thinking, surely all community stations should be set up to flourish? Not quite. Lack of funding is a major stumbling block across the board. “There are lots of running costs [for a radio station], and transmitters don’t work alone,” Jean-Luc commented. He references a rather macabre example he had around some radio stations in Senegal “just waiting for another Ebola”, as this usually mobilised the international community to provide additional operational funding. Astoundingly, this kind of thinking also makes stations better prepared for a fast and effective response when a health crisis does actually emerge. “What we call the ‘new normal’ during COVID-19, for example, is just their normal,” as Jean-Luc puts it.

In South Africa, funding challenges are certainly not part of a so-called ‘new normal’. “There has long been a call for the government to spend 30% of its advertising budget on community radio,” Franz told the panel. “It’s never enough. There is enormous need out there”. He mentioned hearing recently that many community stations are completely off air amid the economic crisis brought on by the coronavirus pandemic. Thabang holds firm about an earlier statement that “out of the 182 NCRF member radio stations, 88% (161) are still on air for 24 hours a day”, as evidenced by a quick audit done in the last week.

So which other challenges are present within the community radio sector? Thabang mentioned that the NCRF recently worked to iron out challenges related to late license renewals and unfair penalties imposed on community stations for late submissions relative to their commercial counterparts. The panel also discussed how community stations are always at a risk of becoming sites of contestation, especially when local elections roll around and politicians start looking at ways to increase their visibility. Security is another issue, as Jean-Luc illustrated by sharing a picture of a station in Bambari in the Central African Republic that had been stripped bare as a result of looting. The sector faces challenges aplenty, so what does the forecast look like for the future?

Existing challenges will not go away and innovation is essential. The coronavirus pandemic will continue to present new challenges and stations will have to respond and adapt accordingly. One fact remains irrespective of the hurdles ahead: community radio will always be a uniting voice for its listeners, as well as a breeding ground for much needed training and skills development across the continent. You’d be hard fought to track down a successful commercial broadcaster today who didn’t have some sort of start or background in community or campus radio. As Franz summarised as the session drew to a close: “This is a way for young people to get launched into the job market, which in turn creates local economic impact”. Community radio continues to be an important force in the radio sector as a result, and as the panel suggested, it’s here to stay for the long haul.