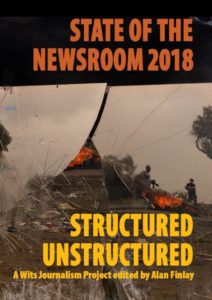 One of the contributors, Prof Glenda Daniels, shares some of her research into job losses in the industry, showing how unsupported journalists are when they lose their jobs. They are often treated shoddily by employers, while unions have little influence outside of the South African Broadcasting Corporation (SABC). Meanwhile, the freelancers’ association Safrea needs to reinvent itself to respond properly to the new reality of unemployed journalists who need a voice, she argues.

Another contributor, Prof Anton Harber suggests that fewer media houses are doing the hard work of investigative journalism, if contributions to the Taco Kuiper Awards are anything to go by. Donors are now supporting some of the most important journalism happening in South Africa – the investigative work of amaBhungane, amongst other projects such as GroundUp and the long-standing Health-e News.

With the pressure on fewer journalists to do more to make the news, contributor Finlay’s article on journalist safety and vulnerability is a call for editors to take more time and thought in planning assignments, to properly consider the risks journalists face both in the newsroom and on the beat.