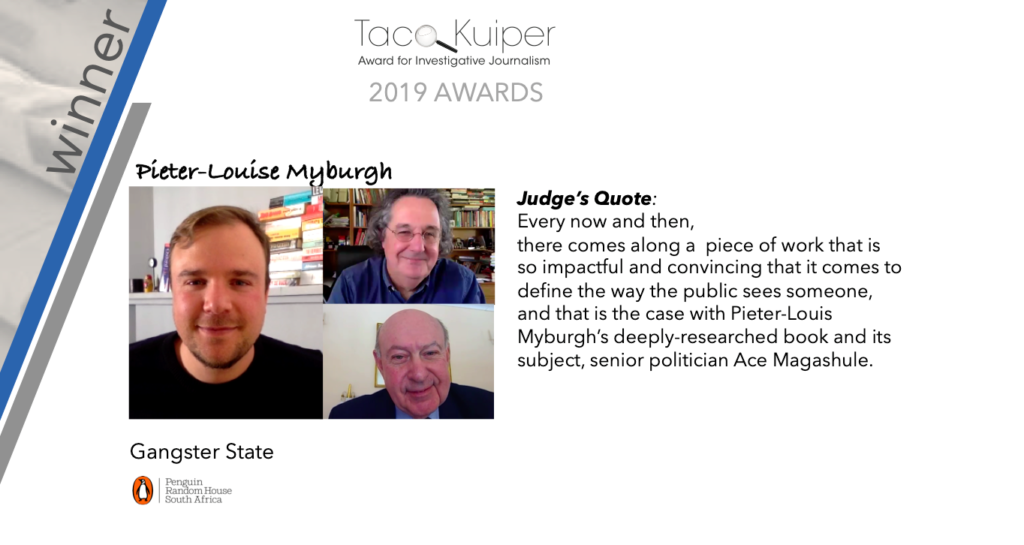 The Taco Kuiper Award for Investigative Reporting, now in its 14th year, is South Africa’s biggest and most prestigious journalism award.

“Every now and then, there comes along a piece of work that is so impactful and convincing that it comes to define the way the public sees someone, and that is the case with Pieter-Louis Myburgh’s deeply-researched book and its subject, senior politician Ace Magashule,” the award judges said.

Pauli van Wyk of Daily Maverick/Scorpio was runner-up for her powerful expose of how the Economic Freedom Fighters benefited from the VBS bank scandal.

The judges said: “Pauli van Wyk’s magnum opus threw open how the EFF benefited from the VBS Bank looting, despite their attempts to cover it up. There was classic investigation involved, like getting documents and inside sources – but it was Pauli’s forensic social media analysis that pulled the story together and broke new ground.”

The panel of judges said that the range and depth of this year’s entries to the competition indicated the healthiness of accountability and watchdog reporting in South Africa, despite adverse conditions. They cited the financial state of the media, and noted that most of the entries came not from the traditional mainstream, but from new non-profit specialist, standalone journalism institutions. And they noted the viciousness of social media attacks on journalists, particularly, women, which was designed to scare them off from doing this work.

The judges paid tribute to the journalists, their editors, publishers and producers, and the whistleblowers, whose brave contributions to truth and accountability often went unrecognised.

The Kuiper Awards are hosted by Wits Journalism in partnership with the Valley Trust, in memory of the late publisher Taco Kuiper.