RDA2020: Challenges & contributions: The state of radio newsrooms in Africa 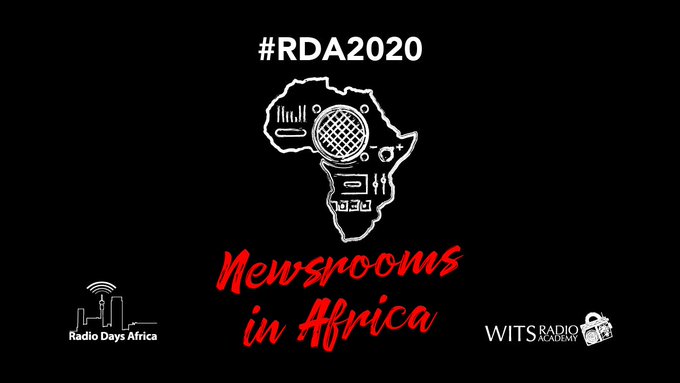 Day 17 of Radio Days Africa 2020 has come and gone, with host Refiloe Mpakanyane discussing radio newsrooms in Africa with panelists Mahlatse Mahlase (Group Editor in Chief at EWN in South Africa), François M’BRA II (Journalist & Editor of Gbêkê FM in Ivory Coast) & Mariama Thiam (Journalist and Consultant at Africa Check, CODESRIA and the Children’s Radio Foundation in Senegal). The conversation centered around the role of radio in Africa, how newsrooms have responded to the global pandemic, key challenges in the sector aside from COVID-19, as well as the importance of training and development in the preservation of democracy. Due to technical difficulties, Mariama was not able to contribute as planned, but nevertheless, the other panelists were able to offer an overview of the state of newsrooms across the continent based on their experiences in their respective countries.

Refiloe dived straight into the session by asking the panel about the role that radio plays on the African continent. “In South Africa, and on many parts of the continent, radio is a friend, a source of information and a source of life,” Mahlatse said. According to François, as a source of information in Ivory Coast, radio has the power to connect people from all over the country. “Radio is a specific tool for the development of our different communities,” he said. “[It] plays a very specific role in broadcasting in local languages. There may be many ethnic groups in a single area, but we are all connected through radio”. Mahlatse also mentioned that as a result of low literacy rates on the continent, radio has the power to reach people from all walks of life, extending its influence into the vast corners of the continent where other forms of media may not be able to go as easily.

The COVID-19 pandemic has certainly extended its reach to all corners of the world, with the virus infecting over 16 million people globally to date. How has this changed the radio newsroom from an operational standpoint? While radio newsrooms have to act as an important source of information, as well as to offer education to people in the fight against a so-called invisible enemy, Mahlatse suggested an important (ever present) consideration that had to be made. “We’ve had to continue to do what newsrooms are all about: to hold those in power accountable”, she said. This, with a particular leaning towards the government response to the crisis, where funding is going, and so forth. François echoed this in mentioning that journalists play a very specific role during the pandemic. What’s clear from the views of the panel is that newsrooms are critical to the life and times of any society at all times, but even more so during a time of crisis, when journalists have to wear multiple hats, while still remembering the foundation of their job and the responsibility that goes along with doing it.

As Mahlatse suggested, holding those in power accountable — especially in a time of crisis — brings with it its own set of specific stresses. She affirmed that in South Africa, journalists are somewhat luckier, as there is a constitution that protects media freedom. In many parts of the continent, this is not the case. “It’s easy to use the state of disaster, or state of emergency, to abuse the system”, she added, with a nod to how dictators have done so in the past. François added that there is freedom of the press in Ivory Coast, and that everything the media does is well regulated. The same certainly can’t be said for other countries. “In Zimbabwe, the state is trying to silence reporters,” Mahlatse said. “As a media, we continue to learn and improve [from these examples], but we are not silenced in the face of pressure”. In her opinion, it’s important for journalists to continue to be brave, and continue to push on, irrespective of the hurdles they may face along the way.

Pushing on can be a challenge, especially in an environment where journalists are notoriously underpaid, and the existential funding crisis in the sector — which revolves primarily around earnings through advertising revenues — is no longer able to keep newsrooms afloat as it could in the past. Mahlatse recalled hearing that around 10 000 journalism jobs had been lost in South Africa in the last decade. This presents another critical issue. As newsrooms have shrunk with management not being able to afford senior journalists, the subsequent hiring of inexperienced journalists have created a crisis of ‘juniorisation’. Newsrooms are now filled with staff who lack the mentorship, training and experience to do their jobs at maximum capacity, which in turn affects accountability as well.

With salary cuts of between 30 & 40% in the short-term as a result of COVID-19, Mahalatse expects the crisis to deepen. In her opinion, what will end up happening, is a situation where you have journalists who are a “jack of all trades, but sadly, a master of none”. The time for specialisation — like a situation with a journalist being a senior whitehouse correspondent in the US for decades and decades — is starting to wither away completely. Without specialists, the quality of journalism is affected in the long run, which could even have dire consequences for democracy, especially in environments where they are more fragile, like on the African continent.

While there is no quick fix solution, a proposed way forward involves the prioritisation of training, especially where external influences with access to funding (like international NGOs) are able to invest in newsrooms and journalists who are looking to specialise or play a more prominent role in the development of their local communities. “Training is very important in the career of any journalist,” François said. “There are institutions here that give journalists the opportunities to get training, but all of them don’t have access to this training”. In Ivory Coast, depending on whether you are formally classified as a professional journalist or not, or if you speak English or not, some training is not readily available to everyone. This is just one example of a hurdle to overcome at a local level, which illustrates that a blanket solution across the entire continent is unlikely to be feasible. Training programs will need to be specialised from country to country, depending on the active needs at the time. Who gets to decide what exactly the active needs are, is an entirely different topic of conversation altogether, and likely to open up a new set of challenges as well.

As today’s session showcased, the need for a bigger conversation around how radio newsrooms in Africa will move forward and continue to survive in the modern world is urgent, and will not be a simple one. With challenges aplenty, now might be an important moment and an opportunity to break down the existing model, with a view towards rebuilding it in a more sustainable way relative to the fast changing global media landscape. Through innovative ideas with a focus on training, the industry will be able to continue to provide high quality reporting which holds figures of power accountable, upholds freedom of the press as a collective, and continues to promote the importance of democracy on the African continent as we move into the future.