RDA2020: Harnessing the potential of podcasting for storytellers across Africa 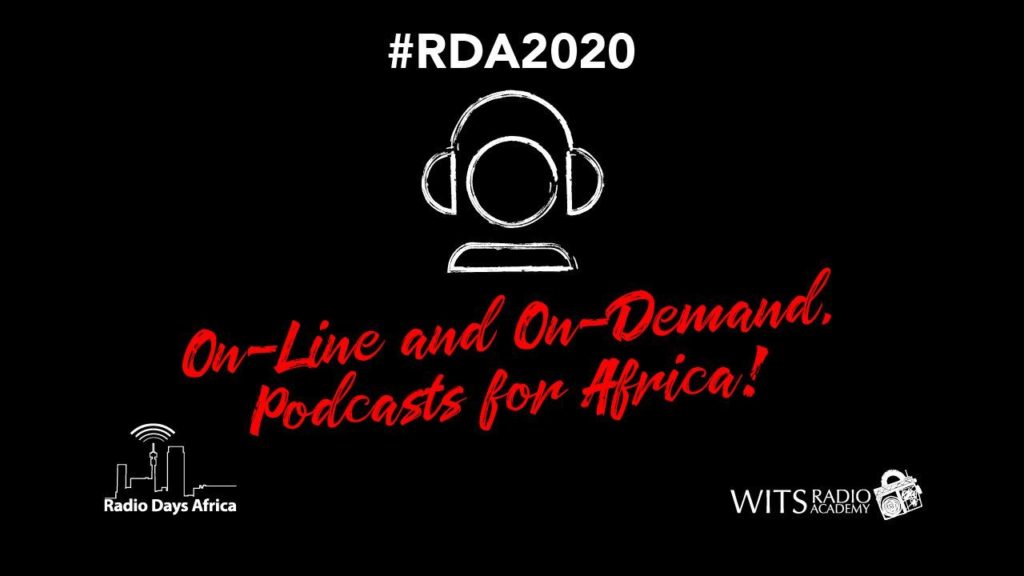 As the audio broadcasting landscape continues to change through the rise of digital media, podcasting is slowly starting to affirm its place in the market on the African continent. Today’s RDA 2020 session, which was hosted by Refiloe Mpakanyane, unpacked the potential of podcasting in Africa, discussed the importance of education and research in the sector, as well as touching on the advertising and monetisation opportunities presenting themselves for new and established podcasters alike.

The panel included a wide range of experts, including Paula Rogo (Founder & CEO of Kali Media in Kenya), Chris Mottes (CEO and Partner of Hindenburg Systems ApS in Denmark), Kim Fox (PodFest Cairo Founder and Organiser in Egypt) and Francois Retief (COO of IONO.FM in South Africa), with each providing insights relative to their experiences with podcasting across the African market. Delegates in attendance today had a lot to say about the topic in the comment section, illustrating a demand for and a hunger to learn more about this relatively ‘green’ space within the broadcasting industry.

Wasting no time, Refiloe jumped straight into asking the panel about the opportunity podcasting represents in their respective territories. For Paula, who is based in Nairobi and has a podcast of her own talking specifically to women in East Africa, the medium primarily presents an opportunity to create niche content. “It’s wide open with opportunity here,” Kim suggested with regards to the Egyptian market. For Francois, podcasting is a medium with a lot of potential in South Africa, albeit that it still has to compete with large, established institutions. Chris focused more on the technical opportunity, referencing his business and how it provides a software solution for people to record, edit and produce a podcast without the skills of a sound engineer. From these responses, it was clear that there are various layers of opportunity scattered across this growing sector.

While the barriers to entry for podcasting are considered relatively low in the West, Africa presents a somewhat different situation. The foundations are still being built from the ground up. “Some people still don’t even know what podcasts are,” Paula said. “Education is very important. The lowest having fruit is making sure people understand what a podcast is first, followed by knowing how to use it”. Data is the other barrier to keep in mind. Buying data for streaming is expensive, especially in a country like South Africa, which is known for higher-than-average costs relative to the rest of the continent. This affects not only the ability of listeners to access podcasts, but also how easy it is for podcasters to regularly upload their podcasts, as well as how they market to and engage with their audiences. Educational and data challenges are important to keep in mind if the industry is going to take greater strides on the continent in the coming decade and beyond.

These barriers aside, it is already possible for storytellers to slowly begin to monetise their podcasts. For Francois, the data in South Africa looks promising. “It’s looking like we might double the amount that businesses are spending on advertising via streaming audio this year,” he said. While the numbers are small relative to traditional radio ad spend, which has been in freefall since COVID-19 began, the data does indicate that the sector is moving in the right direction. Chris mentioned the importance of podcasters exploring a subscription model, which Kim seconded with a slight caveat. “Diversification is the way to go,” she said, mentioning many podcasters using Patreon and sponsorships as a way of multiplying revenue from their content. To do so successfully, audience development should be high up on the priority list. “It’s going to take a lot of labour, and if you’re not doing the research, you won’t figure out what the audience you’re speaking to wants”, she said.

Today’s discussion also highlighted some of the key areas of opportunity in the podcasting market. According to Chris, “expat communities with buying power” are a good audience to keep in mind. As the world continues to become more globalized, more people are looking to have access to their local communities even if they are living abroad. The Arabic podcast market, for instance, is seeing a lot of growth. According to data shared by Kim, which is based on over 800 Arabic language podcasts, the most popular categories within this branch of the sector are ‘social and talk’ as well as ‘education & culture’. For Paula, the podcasters who have the most traction in the Kenyan context are those who offer content outside of what the mainstream media is offering. Referencing popular podcasts in the LGBTQ+ and the political space, she said that “people are always looking for new voices and opinions”. She reiterated that podcasts provide intimate and niche spaces for listeners to connect with voices who actually have something to say.

The podcasting arena may still be relatively small, but it is certainly showing signs of promise and growth across the continent. “Decision makers are waiting for data before they invest,” Paula said as the session started drawing to a close. Noting the importance of research once again, she mentioned that her PodFest team is building a database of African podcasters and venturing out to get access to data that is known for being hard to come by. As with any new branch within an established industry, general adoption and buy-in is going to take time, but we will get there eventually.

One thing remains clear irrespective of how long it might take to do so. Podcasting shows great potential for storytellers of all walks of life across the African continent. The amalgamation of languages, cultures and stories shared through the medium will ultimately form part of how Africans are represented out there in the world. This is a responsibility that shouldn’t be taken lightly, and should also be seen as an exciting prospect for a continent long billed as a hotspot of opportunity around the globe. It will be interesting to see how it unfolds in the coming years.