RDA2020: Fact-checking and curbing the spread of misinformation in the digital age 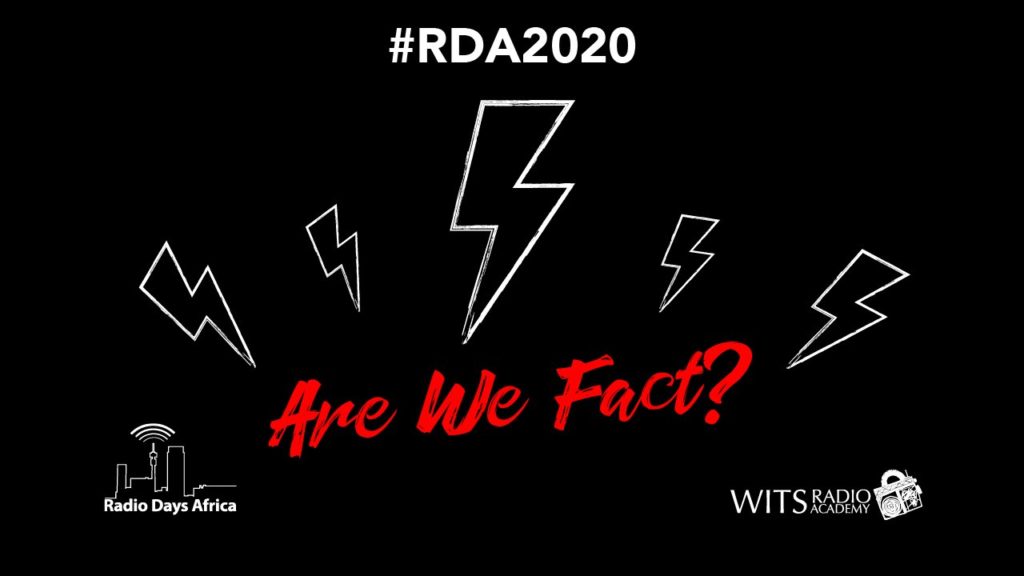 Claire Mawisa hosted an all female panel for Day 9 of Radio Days Africa 2020 today, in what was a stimulating discussion around fact checking and the rapid spread of misinformation in the modern world. Panelists Kate Wilkinson (Deputy Chief-Editor at Africa Check in South Africa), Thandi Smith (Head of Programmes at Media Monitoring Africa in Various Countries) and Nelly Kalu (Contributing Writer at NewsWireNGR in Nigeria) shared their views on the biggest challenges to fact checking in the digital age, talked about social media and its role in spreading misinformation, as well as outlining some practical solutions to help curb the spread on the continent and elsewhere.

As the discussion got underway, Kate suggested that we’re living in the midst of an infodemic, largely due to the sheer volume of information that is being shared and consumed on a daily basis. People are bombarded with news and content in an attention scarce economy, with very few taking the time to reflect on whether what they are consuming or sharing is coming from a reputable source. “With social media and tech, fake news can be made to look serious”, Nelly added. She referenced how things were in the past, when people knew where to go to find stories that were not necessarily meant to be taken seriously. The digital age has jumbled up the real with the fake, made it somewhat of a free for all, and as Kate put it so interestingly, in times of social media “a lie will make itself around the world while the truth is still putting on its boots”.

In the wake of the COVID-19 pandemic, the stakes have never been higher for the spread of misinformation across all forms of media. So how do we classify what falls under the umbrella of so-called ‘fake news’? In the panel responses, it’s clear that it is not as simple to disseminate, and that there are a lot of layers to consider. “Sometimes the premise [of the information] might be correct,” Nelly suggested. “It’s just how it is interpreted that differs”. She proceeded to share that deciding whether a piece contains misinformation requires considering intent, the content itself, as well as looking at where exactly it came from. As you can imagine, this is not a quick process, and for fact checkers, resources are typically limited. “Fact checking takes time, and while it should fit into an editorial process, it’s often skipped in order to be published first”, Kate said.

According to Nelly, another side of fact checking involves investigating who the primary actors are in the process of spreading misinformation. When politicians own media platforms, this becomes even more important and the complexities are amplified. “How do you fact check the person who pays you a salary?”, she asked with specific reference to the economic challenges brought on by the pandemic, which has resulted in large scale job losses and threats of retrenchment for journalists everywhere. This is an important challenge facing the industry that will continue to be problematic heading into the future, and especially so when election years loom and politicians (especially those who own media houses) do whatever they can to gain a foothold over their opponents in any way possible.

As this continues to form part of a larger global debate, how can individuals go about verifying the information they consume in the meantime? “It’s not as simple as saying I’m going to be a fact checker,” Thandi responded. “You have to try and understand what you’re looking at, and be critical about every piece of information that you consume”. Her view is that you shouldn’t trust first, but (rather) trust later. For Nelly, it’s about starting with the basics. “Pause before you send. Look out for outlets you can trust. Be sure who sent something to you before you spread it. We need to prioritise the skills that can protect us from the malice of fake news”, she added. Kate suggested that what may help is an empowering of people to fact check for themselves, especially as there will never be enough fact checkers to handle all the content out there. She discussed an interesting sounding media literacy campaign that her company is running through WhatsApp, which was set up in order to get basic skills, resources and tips regarding how to verify information into the hands of the general public.

Thandi was quick to affirm that curbing the spread of misinformation is going to require a collective effort. “It’s a new skill that we all have to learn on the production and consumption side of the news,” she said. “It’s not only up to one party or industry. As much as it is the responsibility of the media, it’s also up to the consumer to understand”. Nelly added that a critical reluctance to be the ‘first to know’ and ‘first to share’ the news is part of a new way of going about things on both sides. This may involve taking extra time to “let a news story rest” if that is what is required to get the full scoop, or taking a day or two before drawing conclusions when you consume a piece of news media. For her, this is a skill that has to be prioritised. “We need to prioritise [all] the skills that can protect us from the malice of fake news”, she said.

As the session drew to a close, Kate affirmed the important role that the media has to play. “[It] can help elevate and improve the accuracy of information that is so integral to the lives of people across the continent”. In these times, the information exchanged can often even mean the difference between life and death. A key takeaway from today’s discussion was that there has never been a more important time to prioritise fact checking, to get critical about what we’re consuming and whether the sources are trustworthy, and to continue to think critically about the role that traditional and other forms of media play. These considerations will continue to shape the way we live our lives on the African continent, as well as in an increasingly more globalized world as we move into the rest of the 2020’s.